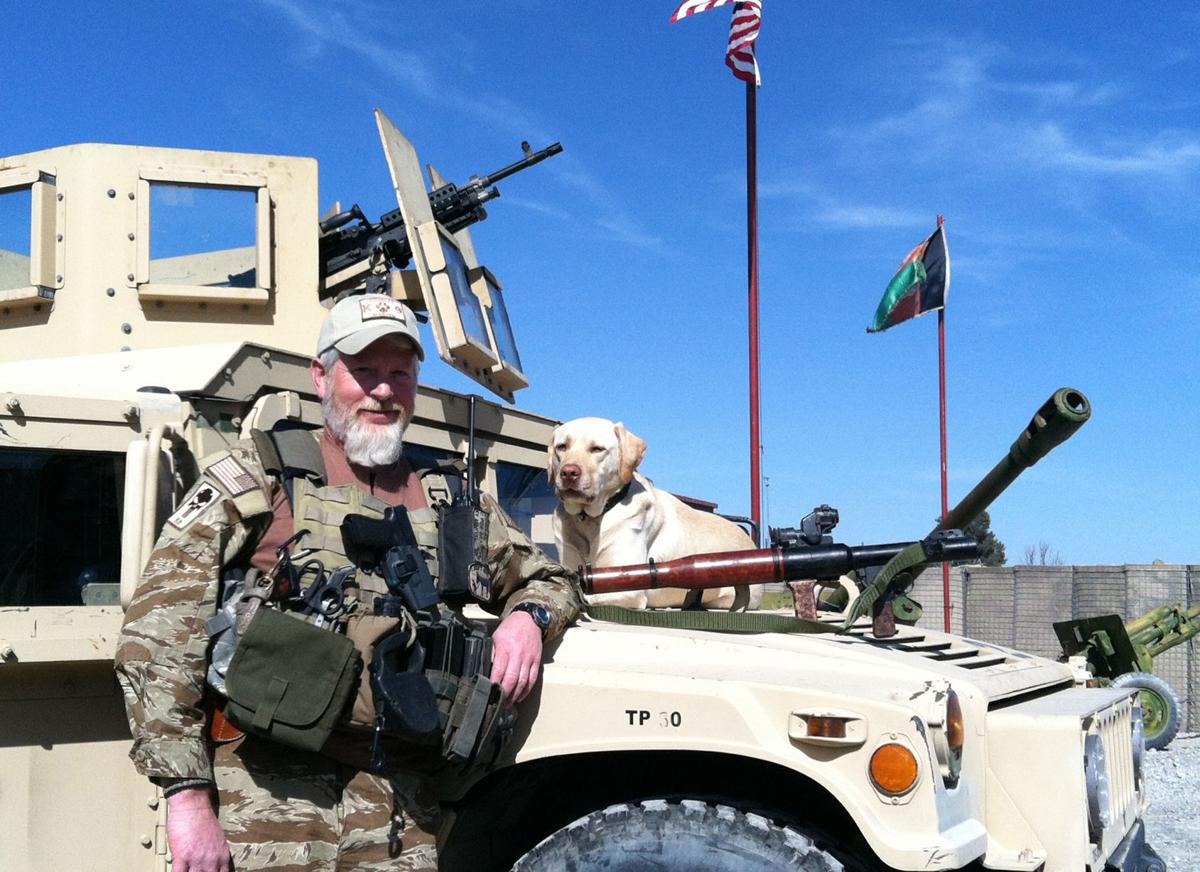 Darrell Douglas and Marvel went together on 17 missions to Afghanistan and Iraq. 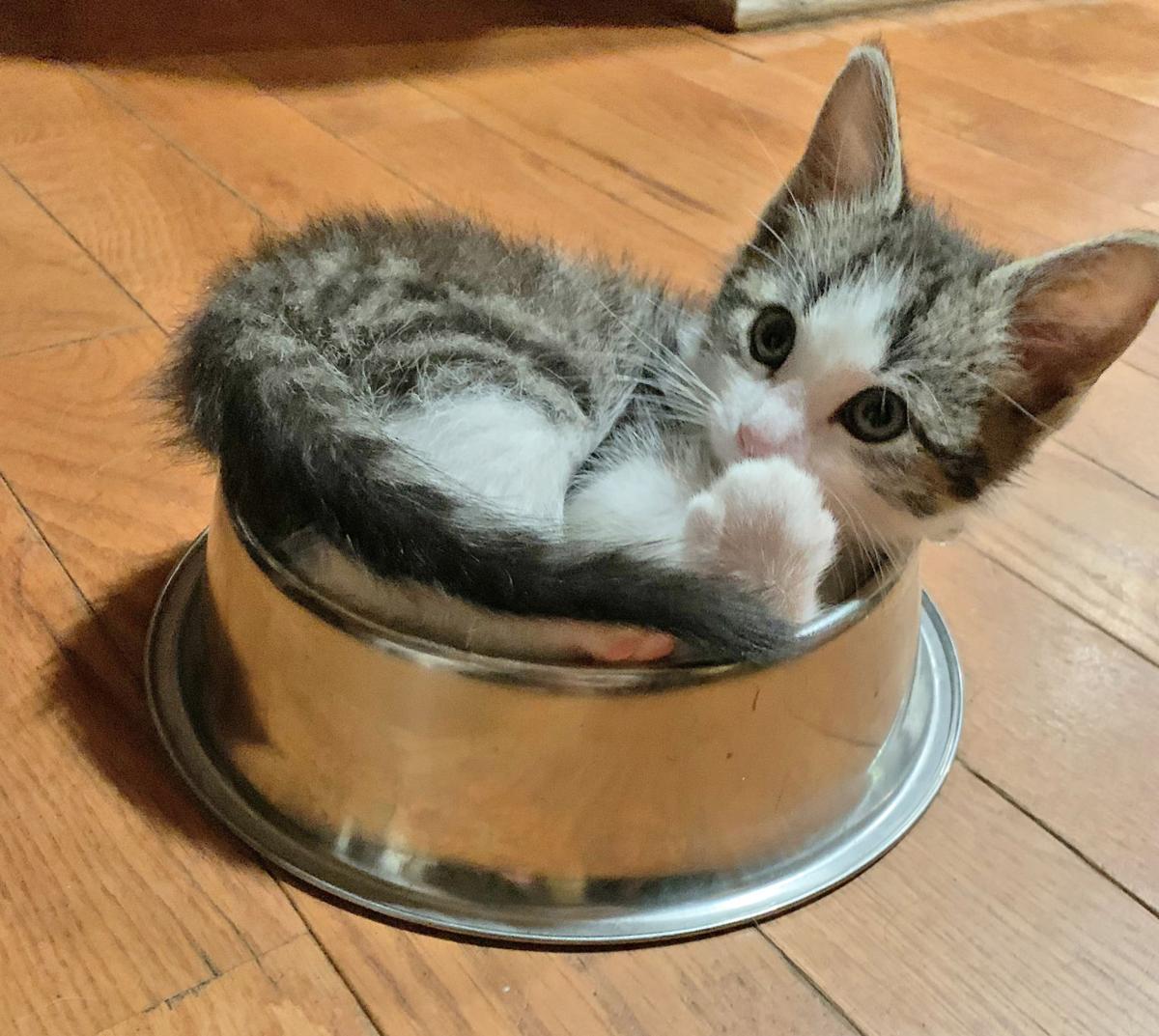 Left: When he was a kitten, Otis sometimes curled up in his food bowl. Right: Darrell Douglas and Marvel went together on 17 missions to Afghanistan and Iraq. 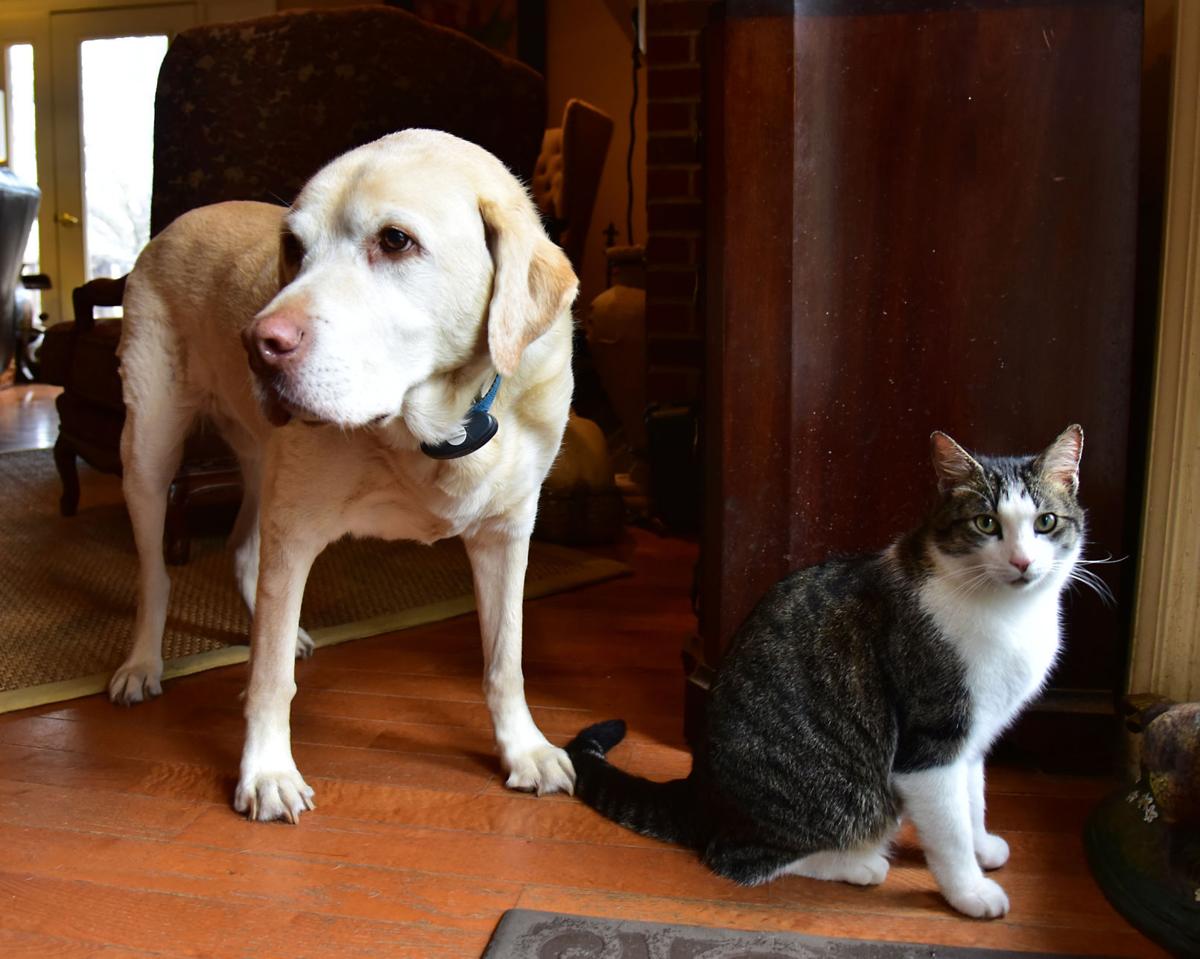 Otis the cat is especially fond of Marvel, their owners say. 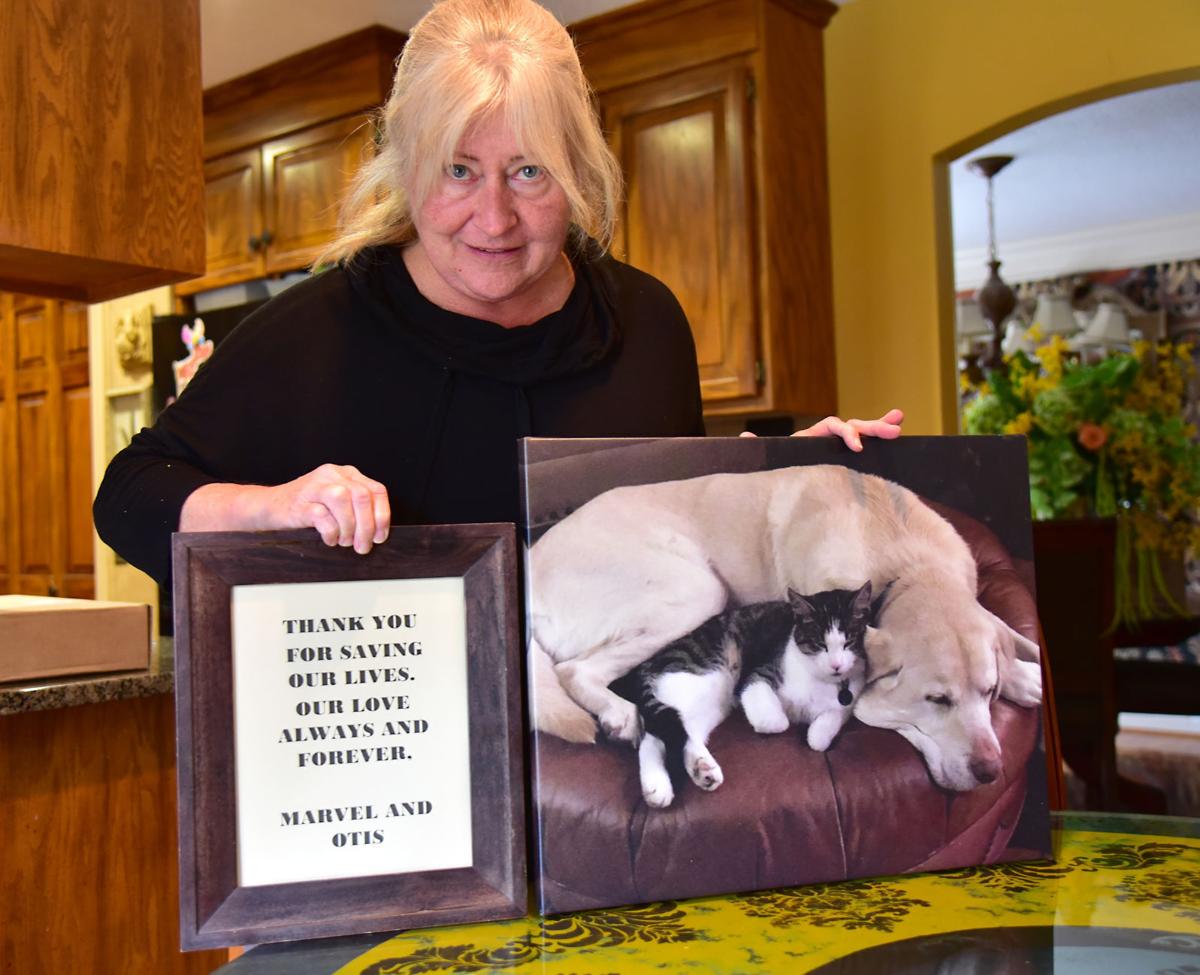 Roberta Grout-Douglas shows a picture of Marvel and Otis and a message thanking doctors from Lake Hickory Veterinary Hospital for saving Marvel.

Marvel, a golden Labrador retriever, and Otis, a rescue cat, were inseparable from the moment they met.

Darrell Douglas and Roberta Grout-Douglas, their owners, described Marvel and Otis as best friends. They often cuddle and sleep together, or roam together outside, Douglas said.

“They are kindred spirits,” he said.

But the two might not have had a chance to even meet had it not been for the veterinarians at Lake Hickory Veterinary Hospital, whom Douglas and Grout-Douglas hope to honor for their role in saving Marvel’s life. Marvel has been cancer-free for two years.

Today, Douglas and Grout-Douglas plan to present Reid and Glander with a plaque and picture of Marvel and Otis together to thank them for saving Marvel’s life.

Marvel, now 12, retired in 2018 from service as an explosives-detection canine after a last trip to Afghanistan, where he aided Douglas, a bomb evaluation specialist.

Douglas started working with Marvel in 2011, and the assignments included 17 trips to Afghanistan and Iraq, a NATO Summit in Chicago and the Boston Marathon bombing.

“He made countless sacrifices to protect our nation,” Douglas said, his voice thick with emotion. “When it was time to go to work, he went to work. He was spot on. ... He’s my best friend. He saved me more than once.”

After realizing that Marvel had post-traumatic stress disorder, Douglas decided to retire Marvel and work with him as a private contractor.

Shortly after they returned home in 2018, Douglas noticed a growth on Marvel’s back right leg. In March 2019, Dr. Alison Reid and Dr. Denise Glander of Lake Hickory Veterinary Hospital performed a biopsy and found that the growth was cancerous. Reid performed surgery but wasn’t able to remove all the cancer, which had traveled down Marvel’s leg, Douglas said.

Marvel developed a close relationship with Otis after he was cured, Douglas said.

Otis is especially fond of Marvel.

“They were inseparable [since they met],” Douglas said. “Marvel loves Otis to death.”

Grout-Douglas said Otis has picked up habits from Marvel and the other dogs.

“He thinks he’s a dog because he was raised by dogs,” she said. “He even fetches.”

This article originally ran on newstopicnews.com.

Top 10 Under 10: Toys for Your Cat or Dog for the Sunnier Days of Spring

As the days get longer and the weather gets warmer, spending time outside is going to become much more common. We are all going to want to spe…

After 400+ days in Texas shelter, dog returned after one day with new owners

Rusty the dog has spent 400+ days at the Humane Society of Central Texas. His latest adoption lasted less than a day, and he was back at the shelter.

How to pick the right dog for your lifestyle

Getting a dog should be a well-planned decision. For the best chance for success, put forth the effort to find the best match for you and your family.

Doggie doo in the White House? One of President Joe Biden's dogs apparently deposited the pile of poo in the hallway Wednesday.

As we plan vacation time, the mere thought of leaving our pets behind can be disconcerting. So, bring them with! Here are five tips to consider.

Darrell Douglas and Marvel went together on 17 missions to Afghanistan and Iraq.

Left: When he was a kitten, Otis sometimes curled up in his food bowl. Right: Darrell Douglas and Marvel went together on 17 missions to Afghanistan and Iraq.

Otis the cat is especially fond of Marvel, their owners say.

Roberta Grout-Douglas shows a picture of Marvel and Otis and a message thanking doctors from Lake Hickory Veterinary Hospital for saving Marvel.