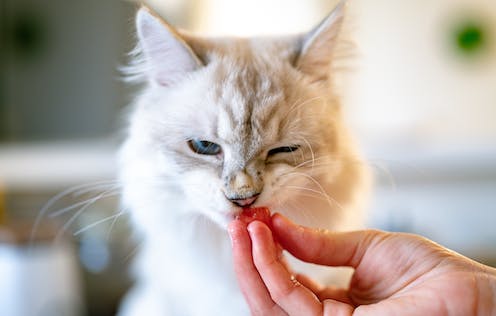 The impact of vegan diets on our pets’ health produces heated debate from people on both sides.

But until now, we haven’t had a formal assessment of the scientific evidence. In new research published in Veterinary Sciences we have brought together the health findings from 16 studies on dogs and cats fed vegan diets.

So, if you’re considering whether 2023 might be the year for your best (pet) friend to adopt a meat-free lifestyle, read on to find out the benefits and risks, and what we still don’t know.

In recent years, people in many parts of the world have been increasingly adopting vegetarian or vegan diets, spurred by ethical concerns for animal welfare, sustainability, or based on perceived health benefits.

Pet owners may also wish to feed their animals in accordance with these dietary choices. In fact, one study found that 35% of owners who did not feed their pets vegan diets would consider them, but found too many barriers. Principal concerns were nutritional adequacy, a lack of veterinary support and there being few commercially available vegan diets.

It has traditionally been considered that the feeding of vegan diets to species that are mainly carnivorous goes against their “nature” and leads to serious health impacts.

There has even been debate around whether the feeding of vegan diets to pets amounts to animal cruelty. But what does the science actually say? 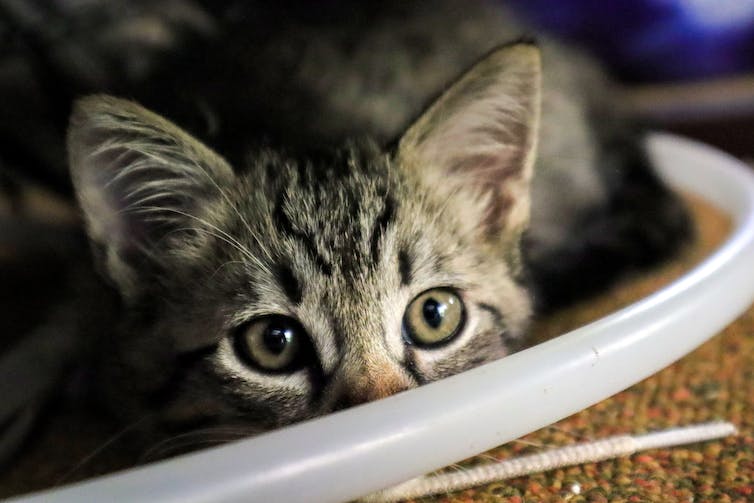 Evolved from fierce desert predators, cats are obligate carnivores — they need meat as part of their diet and can’t digest plants. little plant/Unsplash

Both dogs and cats are carnivores. Dogs are facultative carnivores, which means they can digest plant material and survive without meat, but may not thrive.

Cats on the other hand are obligate carnivores. By definition this means their diet contains more than 70% meat, and they cannot digest plant material.

The anatomy of the dog and cat gut also clearly points to their carnivorous lifestyles. Their teeth are designed to crush and grind meat, and hold prey. Their intestines are also short with a smaller capacity in relation to body size since, unlike herbivores, they do not need to ferment plant-based material to digest it.

Read more: Raw meat pet food may not be good for your dog, or your own health

A key concern with vegan pet diets is that the proteins from cereal grains or soy (the main plant-based proteins) contain fewer essential amino acids, e.g. omega 3 fatty acids or taurine, and do not have all the essential vitamins. These nutrients are necessary for maintaining good heart, eye and liver function.

A range of studies have looked at the nutritional composition of vegan pet diets and some do fall short. Homemade vegan diets are particularly at risk of being nutritionally deficient, but some commercial diets may also not meet requirements set by various pet nutrition guidelines.

But all of this considers vegan diets using an input-based approach — it’s based on predictions. If we really want to know the impact of these diets on health, we need to measure this in the animals. 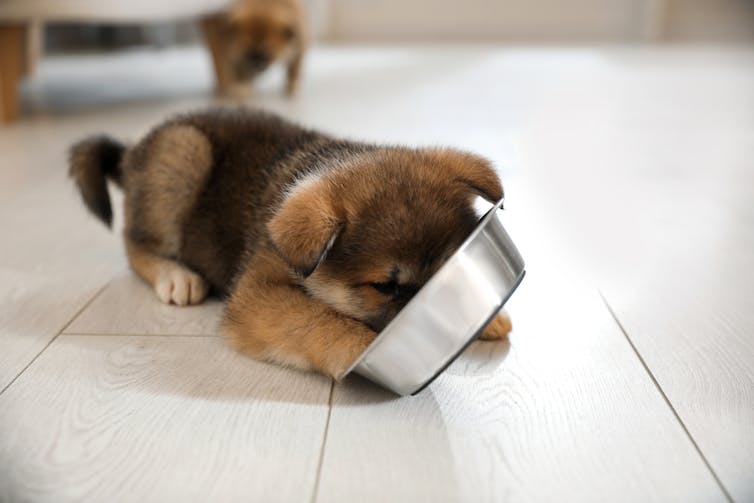 Dogs are facultative carnivores, which means they could theoretically survive without meat, but that’s not the same as thriving. New Africa/Shutterstock

The evidence is lacking

We performed a type of study common in evidence-based practice, called a systematic review. These studies provide a summary of all the research on a topic; it is evaluated for quality, allowing us to give an assessment of how certain we can be when making recommendations based on the evidence.

Only 16 studies have looked at the health impacts of vegan diets in dogs and cats. Cats were only included in six of these, despite being the species most likely to suffer nutrient deficiencies.

A number of these studies used owner reports on health as the measured outcome, for example perception of health or body condition. These are likely to be subjective and could be prone to bias.

In the few studies that measured health directly through examining the animals or running laboratory tests, there was little evidence of adverse health impacts from vegan pet diets. Nutrient levels were generally within normal range, no heart or eye abnormalities were detected, and body and coat condition were normal.

However, it’s important to note these studies often involved low numbers of animals, with vegan diets only being fed to animals for a few weeks — so deficiency may not have had time to develop. Furthermore, the study designs were often ones considered less reliable in evidence-based practice, for example with no control groups used as a comparison.

Owners’ perceptions on the health benefits of the diets were overwhelmingly positive. Advantages cited were reduced obesity, better-smelling breath and reduced skin irritation. The only drawback was increased faecal volume, which seemed tolerable to most owners. 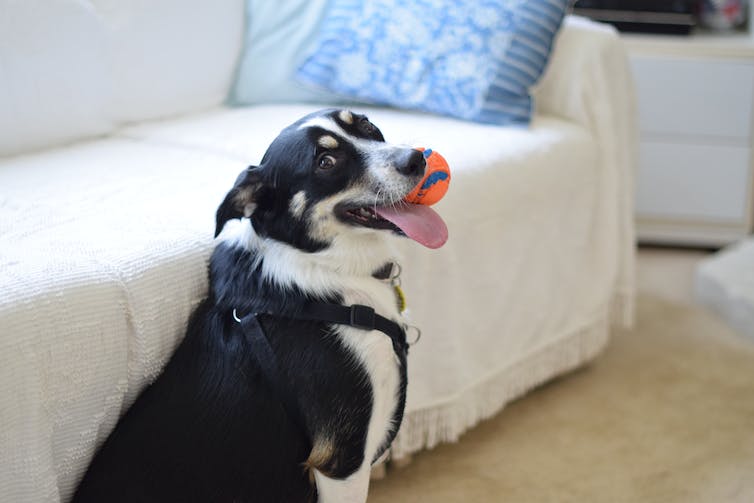 Many of the animals included in the vegan pet diet studies didn’t seem to suffer ill effects, but the quality of the evidence was low. Sarah Brown/Unsplash

Overall, it seems the jury is still out on whether feeding our carnivorous four-legged friends vegan diets is actually safe.

What we can be certain about is that both strong pro- or anti-vegan pet feeding arguments are potentially misguided, and not backed by evidence.

For now, owners committed to feeding their pets a vegan diet should take a cautious approach. Use a complete and balanced commercial vegan diet formulation, and schedule regular health checks with a veterinarian.

The authors do not work for, consult, own shares in or receive funding from any company or organisation that would benefit from this article, and have disclosed no relevant affiliations beyond their academic appointment.

This article is republished from The Conversation under a Creative Commons license.

These 10 houseplants are safe for your pet

While houseplants have the ability to bring life to a room and purify the air, a drawback is that many houseplants are toxic to animals. Here are 10 plants that add beauty to your home without worry.

First, keep in mind that while many plants are technically safe for cats and dogs, it’s best to eliminate temptation and place all houseplants out of reach. This will prevent possible tummy aches and digestive problems in your pets. If a pet ever does ingest a plant, make sure to watch them closely for signs of a negative reaction. Just because a plant is nontoxic for cats and dogs doesn’t mean ingesting it will make them feel good.

Want pet-safe houseplants with blooms? Look no further than African violet. This versatile, hardworking houseplant is right at home with your pets. It comes in a range of purple hues, and it’s low maintenance and thrives without bright light.

The variegated gray-and-green leaves of this plant make it an attractive option for the home. It’s one of many great easy-care houseplants safe for pets.

Unlike their dangerous holiday counterpart amaryllis, Christmas cacti are not poisonous for pets like cats and dogs. The cactus may cause intestinal discomfort if ingested, but overall it’s a safer choice than many other festive plants.

This plant is named for the ease with which it can be divided and shared—so if you happen to receive such a gift, rest assured it’s safe for your cats and dogs. But beware, pets may be especially drawn to the fuzzy, crinkly leaves.

Indoor herb gardens are an easy, fun way to add fresh flavor to your cooking. But not all herbs are created equal when it comes to pet safety. Standards like lavender and oregano are off-limits, but pets are fine around basil, sage and thyme.

This quirky plant has blooms that resemble tubes of lipstick, and is safe for cats and dogs alike. A native of the tropics, it thrives in bright light and loves being outside in the warmer months.

This is the perfect solution for pet owners looking to add a small tree indoors. Safe for cats and dogs, it’s also great for green-thumb beginners.

This plant is perfect for adding a fun splash of pattern to miniature gardens, terrariums, mixed containers and more. Available in colors such as white and pink, it’s as versatile as it is whimsical.

Topping out at 6 to 8 inches, this plant is ideal for small spaces such as bookshelves and end tables. Its red, cream and green leaves curl up at night, giving it its name. What’s more, it’s one of the easiest houseplants you can grow.

Many of the most popular succulents — including hens and chicks, echeveria and rosettes — aren’t problematic. However, with so many varieties on the market, it’s best to research each individual plant.

Virtual vet visits: Telehealth for pets is here and could be the change veterinary medicine needs

The latest tech at CES in Las Vegas includes a button your dog can press to tell you it's hungry and a robot dog toy that you can customize.

Why do our dogs and cats bring us dead animals?

Are our animal companions showing off when they share more than toys with us? And what should we do about it?